What is the benefit of Transmission? 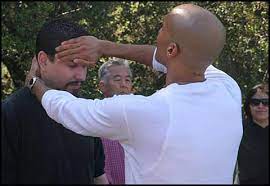 The benefit of doing the transmission is that in the case of a cataclysm, the Elohim would save those who are transmitted to help repopulate the planet again when all the nuclear fallout has been dispersed and the planet is ready to be inhabited again.

The meaning of the transmission is to acknowledge the Elohim as the creators of life on Earth after having read the Messages brought by their prophet, Rael.
------------------------
But those who get transmitted as some sort of future "life insurance" or "just in case..." - without truly recognizing the Elohim as our creators in their hearts - won't get recreated if such cataclysm should happen. On the other hand, maybe the Elohim are very merciful and they will even accept the "fake" transmissions.
--- Transmission & Frontal Bone --- (page 237)
The second part is that after a person becomes aware of the Messages, the computer which takes a sample of his/her DNA at the time of death is automatically disconnected. Thus, we ask Raelians, to make sure that a tiny part of their frontal bone will be removed after death and sent to the local responsible for the Movement for safekeeping.
This bone removal is a second "acknowledgment" that the Elohim are our parents, which is done after death. See screenshot below: 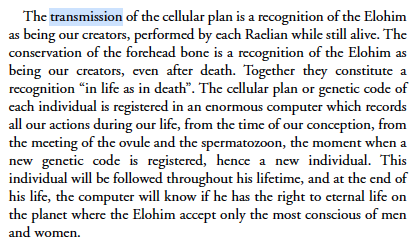 For the frontal bone removal, we get in touch with organizations of "body donors" who are in contact with University hospitals, and in exchange for donating our bodies to science, they agree to remove a portion of the frontal bone.
Two Raelians who died some years ago had this bone extraction performed on them, and the bone sample was sent to the Japanese Raelian Movement for safekeeping.