Will the Elohim arrive by the year 2035?

Yes, that's the latest date that they will come to Earth, but there are conditions that need to be met. See the different comments by Rael (and official IRM documents) below:

Apocalypse #134 (2005)
During his teaching, Maitreya revealed to us that we may reach a “singularity” of scientific development around 2025 and so the Elohim will probably arrive around 2025 to 2035.
Contact #312 (2006)
Rael: (...) everything is going as planned. As you know, everything is going on time. As you know, the deadline to build the embassy for the Elohim is 2035, so we still have plenty of time. That's almost 30 more years. I'm very optimistic.
Contact #383 (2008)
Rael: (...) Their arrival is planned between 2025 and 2035, but it doesn’t mean that because they say between 2025 and 2035 that we will still be alive. It is absolutely possible that Humanity self-destroys
before (...)
Q: Will the Elohim arrival bring freedom?
Rael: It will be a freeing event that will result in a huge advance for Humanity. But for them to arrive, we must at first build the Embassy, but Humanity also must take the right direction. As long as we are on a militarization and world nuclearization path, they will not come, even if the Embassy is built.
From a letter to different prime ministers, written around the year 2,000
Your Excellence,
On behalf of the 35,000 members of our organization and of the President of the Council of the Eternals of the Elohim, it is my honor to propose to acquire a part of your national territory for a period of 99 years to build the Elohim’s Embassy. The purpose of this building is to welcome representatives of this Extra-terrestrial civilization who created life a long time ago on our planet, of whom traces have been kept in many traditions and religions, and who should come back on earth before the year 2035.
From an invitation to the Buddhist community in Japan (2002)
The Elohim announced that we would return to Earth by the year 2035, at the latest.
From an interview on Mongolian TV (2008)
Because this is my mission, to build an embassy to welcome them back and everybody will be able to see them. We must do that very soon, before 2035.
From the official Embassy dossier (2012)
The Elohim told Rael that they will return no later than 2035. Therefore, part of Rael’s mission is to complete the embassy well before that year, since they may return earlier.
-------------
There are a few other mentions of the year 2035, but the information
is similar to the texts above. 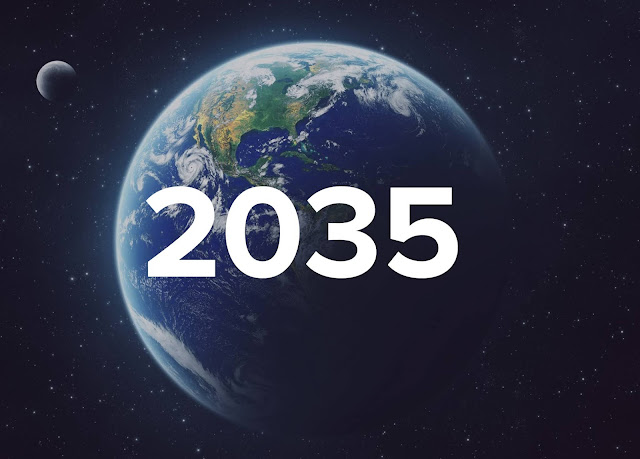