Which type of alien is this? 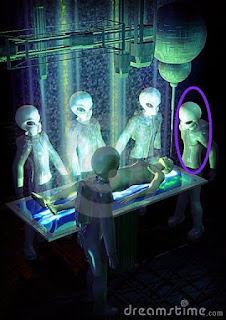 The aliens depicted in the drawing are of the type called “greys”.
The Messages don't mention them... but since the Elohim told Rael that the only extraterrestrials currently visiting the Earth are the Elohim themselves, those "greys" could be some type of biological robot, supposing they are for real.

Otherwise, they could very well be the product of disinformation to scare people into believing that people from other planets are scary and do bad things.

This point is mentioned in the Messages, where the Elohim tell us that eventually when there are no "enemy" nations left on Earth, the governments will play the scary-aliens from space card as an excuse to keep their power and continue stockpiling weapons of mass destruction.
Love, Lluisa